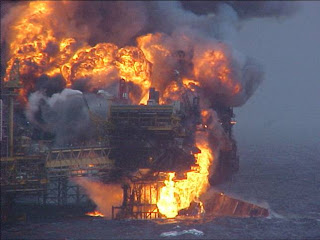 New Delhi, Jul 27 : Six years have passed when the country's biggest oilfield was destroyed in a disastrous fire at Bombay High North.

This killed 11 people and as many went missing, but those who survived the accident still feel the unrest of the flames.

On this day in 2005, Samudra Suraksha, a ship in which one of the ONGC employees cut his fingers, lost control, drifted and collided against BHN, leading to a major oil spill and causing both the platform and the ship to catch fire.

The tragedy was even worse as it took place at a time when the coastal city was trying to come out of torrential rains massacre that had already taken 300 lives.

However, maximum of the people onboard were saved. Some of them jumped into the Arabian Sea or into the lifeboats, some crossed over to a neighbouring smaller rig via a low-slung bridge while many were rescued by another ONGC ship DSV Samudra Prabha, a fire-fighting ship with High voltage generation of 11400 KW.

"It was a massive explosion. When we reached BHN for rescue operations, to our horror, we saw that the platform had vanished in less that two hours time," Engineer Sharad Gupta, who was the DP Electronics Officer at Samudra Prabha, said today.

Er Gupta and his team were awarded Maritime Bravery Award 2005 by DG Shipping, Government of India, for this life saving task.

Sharing how in such adverse conditions 361 lives were saved and he said, "Samudra Suraksha, which was on fire, was drifting dangerously close to other installations and had six divers pressurised in chamber. Fortunately, all those six were saved. But we could not save the ship."

Heavy rains had flooded Juhu helibase and ONGC colonies grounding many helicopters and so the rescue was tougher. The sea was also rough. The ship had slowly sank on the intervening night of August 1 and 2.